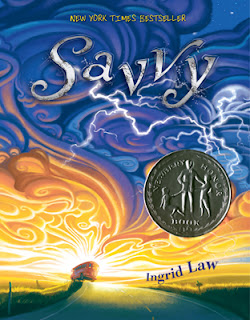 
Summary:
A vibrant new voice . . . a modern classic.
For generations, the Beaumont family has harbored a magical secret. They each possess a "savvy" -a special supernatural power that strikes when they turn thirteen. Grandpa Bomba moves mountains, her older brothers create hurricanes and spark electricity . . . and now it's the eve of Mibs's big day.

As if waiting weren't hard enough, the family gets scary news two days before Mibs's birthday: Poppa has been in a terrible accident. Mibs develops the singular mission to get to the hospital and prove that her new power can save her dad. So she sneaks onto a salesman's bus . . . only to find the bus heading in the opposite direction. Suddenly Mibs finds herself on an unforgettable odyssey that will force her to make sense of growing up-and of other people, who might also have a few secrets hidden just beneath the skin.
Pricky's Review:
Rated 1 Star on Goodreads.

I actually had to look up the criteria for a Newberry Medal after reading this. Even as an "honor" medal, I couldn't believe that it deserved the title of "most distinguished contribution to American literature for children." But I guess that's not really up to me, it's up to 15 people to decide.


But...if it were up to me, this book would probably get a medal for "best concoction of invented and real words...without saying much." I fully admit that it's unique prose caught my eye in the beginning but after a while the story was so full of word fluff that when digging around for the story, I realized there wasn't very much there.


Word Fluff:
I appreciate beautiful prose but it just got to be too much. Much of the prose sounded like this:
"...next to the pushing-pulling waves."
"...broody Samson was a dark and shadowy seven..."
"...my palms burned like fire from all of the hurt just under the skin."
"Girls only get quiet, polite savvies--sugar and spice and everything humdrum savvies."
etc. etc. etc.
Now, don't get me wrong. I fully enjoy adjective-saturated imagery...but when the focus is more on the word usage than on the plot, I begin to wonder what was the point of the story in the first place?


Plot (Spoiler Warning):
In case you're wondering, the plot basically goes like this:
1) Leading off from the summary...Mib's parents are at the hospital.
2) Since her parents aren't there, the town's preacher family hosts Mibs 13th birthday party which is a disaster so Mibs hides aboard the Bible Supply Bus.
3) Along with 2 of the preacher's kids and 2 of Mib's siblings, the kids stow away on the bus, heading toward Salina (where the hospital is located). Eventually we learn that an alert has gone out that kids are missing. (Btw Grandpa Bomba is at home with the other Beaumont sibling.)
4) Mibs discovers that her special magical power is hearing the thoughts of people through ink on their skin.
5) The kids and bus driver and another "hitchhiker" travel through different cities until they finally arrive at the hospital.
6) Mibs tells her dad that even though he's "human," he still has a magical power which is that he never gives up.
7) Family returns home.
The End.


Obviously, the message here is one we've heard over and over again. Mibs who is somewhat of a social outcast is initially disappointed in her ability (i.e., Savvy) but ends up appreciating it, and through her adventure she develops friendships with other kids. At the end, there was nothing awe-inspiring of this message. And for an honor book, I expected to be blown away.


Instead, all I could think about was:
1) Why would a group of teenagers along with a 7-year-old go hide in the back of a school bus with a stranger driver. Did they not consider that their parents would be frightened to death by their disappearance? Furthermore, couldn't one of the townsfolk or even her Grandpa drive them to Salina to be with her dad? (Oh, but then we wouldn't have a story now would we?) And couldn't Mibs have told her Grandpa or left a note before they drove off?
2) Then when the bus driver, Lester, finally discovers them, does he insist on calling their parents? Is he the responsible adult he should be? Oh no, he lets them stay on the bus while he continues making his deliveries.
3) When the bus happens upon a broken down car with a lady (Lill) waiting by the side of the road, Lill decides to join them on the bus...because that's just what you should do when your car breaks down...climb aboard a bus of full of kids with a strange man.
4) But Lill is more of a responsible adult because she makes them call their parents...but isn't clever enough to know that the kids trick her by not really calling their parents. (And would any parent that had missing kids tell Lill to just wait until the next day to bring them home?)
5) And when the kids were finally found, when would a police officer ever say this: "I know how easy it is to make wrong choices and end up in difficult situations, but things don't always turn out badly. There will be consequences, of course, but no one got hurt, and no hurt was meant. So, as far as I know, no one's pressing any charges against those folks out there. [Lester] and [Lill] may have made some ill-advised decisions, but they did do a good job of looking after you and keeping you all safe."
6) So I guess the real message would be:


"Kids, if you make really bad choices, but nothing bad comes out of it, it's okay then."


I still can't believe this is what is considered a contribution to children's literature. If you are interested in a Newberry Medal read, there are much better choices out there: try Holes, By Louis Sachar or A Wrinkle in Time, By Madeleine L'Engle or The Giver, By Lois Lowry .

Labels: Could Have Been But Wasn't, Disappointment, Magic, Pricky's Review