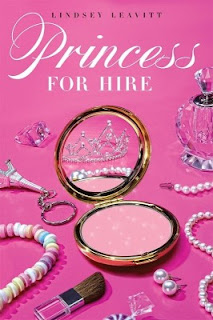 When Desi Bascomb gets discovered by the elite Facade Agency–royalty surrogates extraordinaire–her life goes from glamour-starved to spectacular in a blink. As her new agent, Meredith, explains, Desi has a rare magical ability: when she applies the ancient Egyptian formula “Royal Rouge,” she can transform temporarily into the exact lookalike of any princess who needs her subbing services. Dream come true, right?
Well, Desi soon discovers that subbing involves a lot more than wearing a tiara and waving at cameras. Like, what do you do when a bullying older sister puts you on a heinous crash diet? Or when the tribal villagers gather to watch you perform a ceremonial dance you don’t know? Or when a princess’s conflicted sweetheart shows up to break things off–and you know she would want you to change his mind?
In this hilarious series debut, one girl’s dream of glamour transforms into something bigger: the desire to make a positive impact. And an impact Desi makes, one royal fiasco at a time.

Princess for Hire is the first book in a series. Did I read it first? Nope. My library hadn't shelved this book in yet. Book two The Royal Treatment, however,  was mine on hold. (Nice fresh crisp copy.) I couldn't wait for this one to be ready, and so I read book TWO first! I wouldn't suggest doing that. Well, not if you think you'll end up LOVING the series. You really have to do it the right way! Read in order!

That said,  I really liked this book. And the only reason why I would rate it 4 bites out of 5, is only because I read it second. I knew what was coming. And I was just wanting it to get to that scene.  I wanted to get to that point. But I still enjoyed the book. But I think I like the second even better. But I could be biased since I did read it first.

Pricky teases for me liking books about princesses. Whatever! I guess I just like fairytales! She's the odd one, right? Anyway I thought Desi was going through jobs so quickly--one right after another, whereas in book two I didn't really feel that way. It seemed almost unrealistic. Yeah yeah yeah there's bubbles/princesses-for-hire fake thing going on, but still--it seemed TIRING for Desi. How is she not zombie exhausted?

I did wish that we could hear more about her home life-but that's only because I KNEW what was going to happen! Again-don't read book 2 before book 1. Just don't.

Hungry for a copy? Princess for Hire

is now available at booksellers everywhere.

P.S. Labeled also as "life-swap" but it's not technically swapping, but a one-say swap!

The Mysterious Benedict Society: Are you special too? 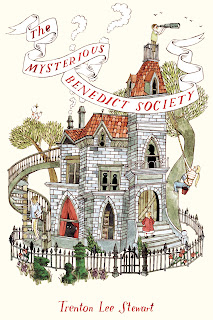 
Dozens of children respond to this peculiar ad in the newspaper and are then put through a series of mind-bending tests, which readers take along with them. Only four children-two boys and two girls-succeed. Their challenge: to go on a secret mission that only the most intelligent and inventive children could complete. To accomplish it they will have to go undercover at the Learning Institute for the Very Enlightened, where the only rule is that there are no rules. But what they'll find in the hidden underground tunnels of the school is more than your average school supplies.

If you have the attention span for this book, this is a worthwhile read. You'll be eating it for a while-it is almost 500 pages. I've seen this book before on goodreads.com, but wasn't quite drawn to it. Maybe it was the cover. I think I just wasn't ready for it at the time. (Though I do really love the drawings and there's a different drawing for each chapter as well.)

Then while waiting at the library waiting as my daughter played on the computer I opened the book and started it. My feast had begun.

I thought the book was very well thought out. And there's just something about being a really smart kid that captures my attention. (Not that I was super smart...or super not smart!) But we have smart, lonely kids, that come together and kick butt.

I could tell that the author put much thought into the little details and made sure things were wrapped up nicely at the end. There wasn't really a cliffhanger, but room to grow-as shown by the amount of books there are now out in the series-FOUR.

I enjoyed learning the details about these four kids and their different strengths, but being able to still work together.

And I LOVED the ending with Constance. I even had to tell that part to my husband. I hope you'll read it too.

Rated: 5 Bites If you dare take the challenge of this large feast, I hope you will be filled as I was.

To read the whole book online click below for link.

Out of My Mind: What if you couldn't speak? 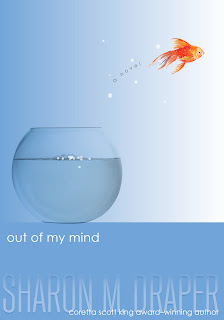 Out of My Mind

Eleven-year-old Melody has a photographic memory. Her head is like a video camera that is always recording. Always. And there's no delete button. She's the smartest kid in her whole school—but no one knows it. Most people—her teachers and doctors included—don't think she's capable of learning, and up until recently her school days consisted of listening to the same preschool-level alphabet lessons again and again and again. If only she could speak up, if only she could tell people what she thinks and knows . . . but she can't, because Melody can't talk. She can't walk. She can't write.
Being stuck inside her head is making Melody go out of her mind—that is, until she discovers something that will allow her to speak for the first time ever. At last Melody has a voice . . . but not everyone around her is ready to hear it.


I was trying to find books from my sister's reading list that I would like to read from my library. Somehow I had found this book (even though it wasn't even on her list) and I'm so glad I did.

Melody has such an easy to read "voice". She's funny. She has real feelings. She's smart. You can really get yourself inside the head of someone with a disability and what they might be thinking. But even though this book is about a disabled girl, it doesn't feel preachy. This book can change your perspective and entertain you as well.

The only thing I thought was a little odd was spoiler (the fact that her parents hadn't thought to get her something that could make her "talk" sooner? I guess they are two working and probably overstressed parents. But you'd think since Melody had her plastic board with words on it that they would have thought of something more.)

The lingo the kids used seemed a bit strange. Maybe a bit forced. But maybe kids really do speak in that manner nowadays.

Content Advisory: spoiler (child gets hit by a car), deals with children with disabilities

Rated: 4 Bites I really liked it and hope you will give it a chance to fill your tummy.
Out of My Mind

is available in bookstores everywhere.